EHB is a brake-by-wire system that replaces some mechanical components with electronic components. The brake pedal is no longer directly connected to the brake wheel cylinder. The driver's operation is collected by the sensor as a control intention. The hydraulic actuator is used to complete the braking operation, which makes up for the deficiencies caused by the design and principle of the traditional braking system, and maximizes the freedom of braking control, thereby making full use of the road surface adhesion and improving the braking efficiency.

This article refers to the address: http://

As a relatively new type of brake system, EHB has a short development time, but its development prospects are broad. Major auto manufacturers and research institutes are actively developing this system.

In 1994, Analogy developed a set of EHB control systems using Saber simulation. In 1996, Bosch conducted a real vehicle test on the EHB system it developed, and achieved satisfactory results. The system has also achieved great success in practical applications, and has obvious effects in shortening the braking distance and ensuring vehicle stability. . Companies such as TRW, Delphi, and Continental Tweed have also developed similar EHB systems and obtained a series of patents from 2000 to 2002.

In September 2001, the Mercedes SL new sports car equipped with the Sensotronic Brake Control system was first exhibited at the Frankfurt International Motor Show. In 2002, the system was equipped with the new Mercedes-Benz E-Class, 2003. Equipped in the Estate model, in the same year, Bosch first introduced the four-wheel drive SBC installed on the Mercedes E-Class 4matic, which is the first time the EHB system has been used in serial production. South Korea's Wandu Company, Continental Twes Company, and Tianhe Company have all made progress in the development of EHB systems, and have begun to supply vehicles such as GM, Ford and DaimlerChrysler.

Advantages of the EHB system

The traditional brake system is shown in Figure 1. The brake master cylinder is connected to the brake wheel cylinder through the brake line. The brake pressure is directly input by the manpower through the brake pedal, and the vacuum booster is also used as the auxiliary power source. The degree of vacuum is limited. This structural feature limits the establishment of brake pressure, the distribution of braking forces for each wheel, and integrated control with other systems, and has limited potential to further improve braking effectiveness.

3. The braking characteristics of the traditional braking system cannot be changed at will, and the EHB system judges the different braking behaviors by analyzing the driver's intention and provides the most reasonable pressure variation characteristics.

4. The traditional brake system can only realize the distribution of the front and rear brake pressure to a certain extent, and the EHB system has a great degree of freedom in the four-wheel pressure distribution, which is effective when braking on the road with different adhesion coefficients. .

6. Since the brake sensor detects the movement speed of the pedal and the stroke of the pedal, the electronic control unit adjusts the brake pressure accordingly, and the manufacturer can change the control algorithm according to different models and statistics on the driving habits of the driver. And the pedal feel simulator provides the driver with a different pedal feel, making the EHB portable.

7. When the traditional brake system performs ABS work, the pressure in the brake pipe fluctuates, causing the brake pedal to vibrate. The driver who lacks experience often does not consciously reduce the pedal force, thus affecting the braking effect. . EHB completely solves this problem because the pedal is not directly connected to the brake pipe. It not only ensures that each wheel will not lock, but also releases the brake quickly. The braking process is safe and efficient, and has little impact on power loss.

In addition to the basic functions of basic braking and ABS that can be realized by traditional braking systems, EHB can achieve other excellent auxiliary functions.

8. When the vehicle is driving on rainy or wet road, according to the action of the windshield wiper, the EHB system can send a weak brake pulse at a fixed interval to clear the water film on the brake lining to eliminate The water degradation of the brakes ensures reliable braking.

9. Most drivers will hesitate and exert insufficient pedaling force when applying braking force in the event of an emergency, resulting in a dangerous situation. The EHB adjusts the braking force (determined by the pedal stroke and pedal acceleration) by correctly identifying the driver's intention to avoid insufficient braking force.

10. When it is necessary to maintain the parking state, the system can apply a certain braking force to the wheel, even if the driver releases the brake pedal, it can generate a certain braking pressure on the wheel, reduce the burden on the driver and improve driving comfort. , to achieve the electronic parking control EPB (Electric Parking Brake).

The composition and working principle of the EHB system

As shown in Figure 2, the EHB system consists primarily of a brake pedal unit, an electronic control unit (ECU), a hydraulic control unit (HCU), and a series of sensors.

Includes pedal feel simulator, pedal force sensor or / and pedal travel sensor and brake pedal. The pedal feel simulator is an important part of the EHB system, providing the driver with a pedal feel (pedal reaction and pedal travel) similar to that of a conventional brake system, enabling it to perform braking operations according to his own habits and experience. The pedal sensor is used to monitor the driver's intention of steering. Generally, the pedal stroke sensor is used, and the pedal force sensor is used less or both, to provide redundant sensors and can be used for fault diagnosis. Figure 3 shows the production of an electronic brake pedal unit for Continental Tweed.

The brake pressure regulator is used to realize the wheel pressure increase and decompression operation. Figure 4 shows the hydraulic control unit (HCU) of the EHB of the Continental Tweed belt ECU.

Human-driven emergency braking system When the servo system is seriously faulty, the brake fluid is driven by the human-powered master cylinder into the brake wheel cylinder to ensure the most basic braking force to decelerate the vehicle.

Figure 5 shows a patent issued by Bosch on the EHB system with a pedal feel simulation device, a hydraulic servo-controlled service brake system and a manpower-operated emergency brake system, among them, hydraulic The servo system controls the pressure of the four wheels, while the manual emergency braking system can only control two front wheels. The system has a total of 14 solenoid valves, all of which are two-position two-way valves.

In the normal service brake, when the brake light switch is triggered, the electronic control unit determines that the brake occurs, the pedal stroke sensor senses the driver's braking intention, and then energizes to close the isolation valve, and from the brake master cylinder under the action of manpower The output brake fluid enters the pedal feel simulator, giving the driver the same feel as when operating a conventional brake system. 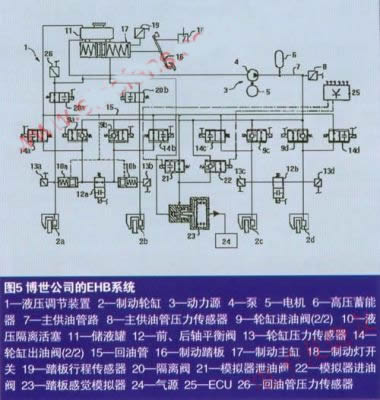 The braking action to be achieved by EHB is divided into basic braking and control braking.

The so-called basic braking means that the driver applies a large or small pedal force according to his own intention, controls the deceleration of the vehicle and guarantees the desired driving direction. The value of the pedal force does not reach the degree of locking the wheel. . At this time, the EHB system should fully reflect the driver's intention and give the driver of the wheel the desired braking force.

Controlled braking refers to braking that is performed with the necessary additional intervention. That is, when the driver wants to take emergency full braking on the vehicle and vigorously and quickly step on the brake pedal, the EHB system should recognize this requirement, giving the wheel a sufficiently large brake pressure while facing the wheel. The upper brake pressure is controlled to prevent the wheel from being locked and the braking stability of the vehicle from deteriorating.

The EHB system has the superiority that the traditional brake system can't match, but the EHB system still uses the electro-hydraulic control mode. In the strict sense, it is not a pure line control system. Compared with the EMB brake system EHB system, the EHB system is currently The technology is more mature and therefore has excellent development prospects in the short term.

we offer the most extensive models for heating clothing industry, our heating clothing batteries range from 3.7v to 14.8v most popular models, capacity from 1800mah to 10000mah, with LED light and switches to display remaining power level and set output levels. OEM/ODM accepted and we are specilisted in design these batteries, providing industry design, pcb design, tooling design, moulding service, prototyping, and flexiable small quantity manufacturing. 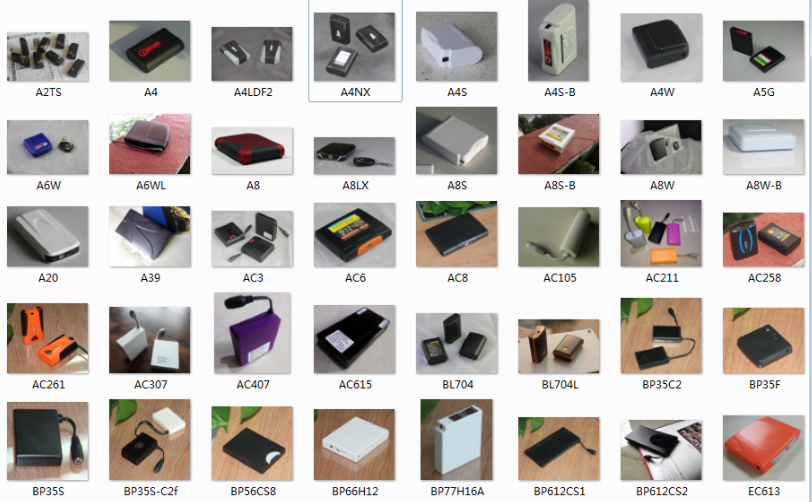