1.1 The overall framework of the system

Based on the characteristics of underwater acoustic channels, and taking into account that the spacing between adjacent points in the frequency domain must be greater than the coherent bandwidth of the channel, frequency hopping communication using FSK modulation is used. Similar to the structure of wireless sensor networks on land, the topology of underwater acoustic sensor networks can be divided into two categories: one is the typical star structure used in small-scale networks; the other is large-scale, multi-node, A distributed peer-to-peer network topology in a dispersed and dense environment.

The design realizes a small-scale network, using a star structure, consisting of a PC, a main node, and multiple sub-nodes to form a network system. A PC connected to the Internet network is the monitoring center of the network. The master node broadcasts information to realize data transmission and command control. The terminal equipment is directly controlled by the master node. The underwater wireless sensor network is constructed. The system is shown in Figure 1. As shown. 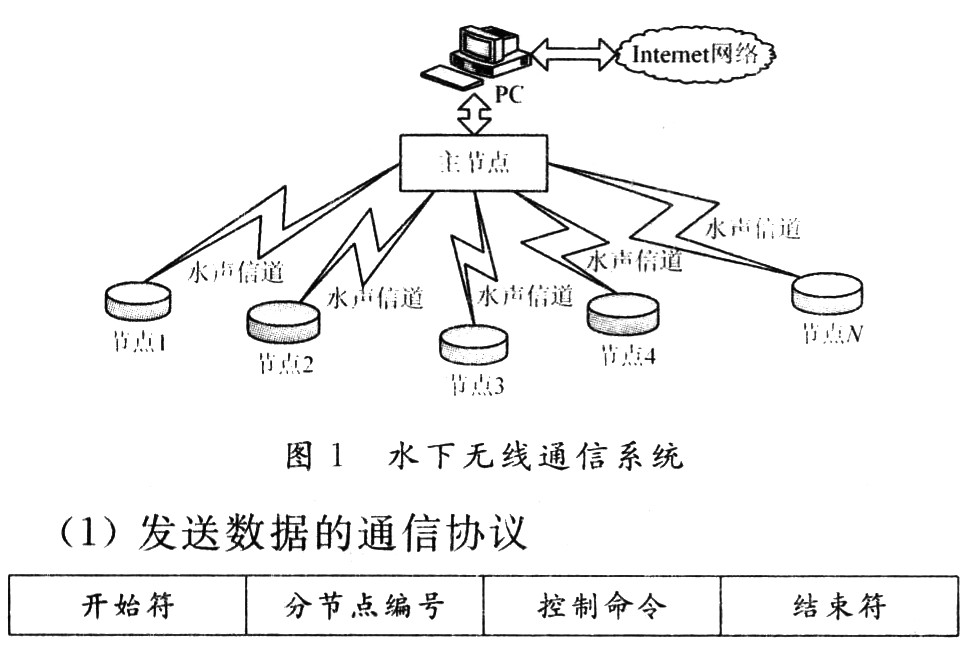 The start character uses the ASCII code of "%" to indicate the data frame header.

The slave number 0 to 99 indicates that the command is to control the number of sub-nodes. The 0 number is a broadcast setting, that is, if it is a 0 number, the water surface repeater sends control information to each underwater acoustic communication slave group.

The control command sets the action type number to be processed by the slave node, and the control instruction number corresponds to the underwater wireless sensor network sub-node taking different control operations.

The end character indicates the end of the data frame with the ASCII code of "MYM".

The start character uses the ASCII code of "%" to indicate the data frame header.
The data currently sent back from the slave number comes from the sub-node number of the underwater wireless sensor network.
The data type indicates the meaning of the transmitted data.
Data content specifically monitored data.
The end character adopts the ASCII code of "MYM" to represent the end of the data frame.

There are two kinds of equipment in the underwater wireless sensor network: the main node and the sub-node. The main node is mainly responsible for the release of various monitoring tasks and the simple aggregation and processing of feedback information such as data. It is the bridge between the remaining nodes and the main control PC. The sub-node is mainly responsible for collecting the measurement data of sensors or interface devices. And feedback the response signal or data directly to the master node. The communication between the PC and the master node is achieved through RS 232, while the communication between the master node and each node is achieved through the underwater acoustic transducer.

The system hardware structure is shown in Figure 2.

After the master node is initialized, the system is normally waiting for the PC to send the prepared information or other monitoring commands. After receiving the data, it calls the sending program to send the received information plus the synchronization header to the corresponding sub-node. The software flow is shown in Figure 3. 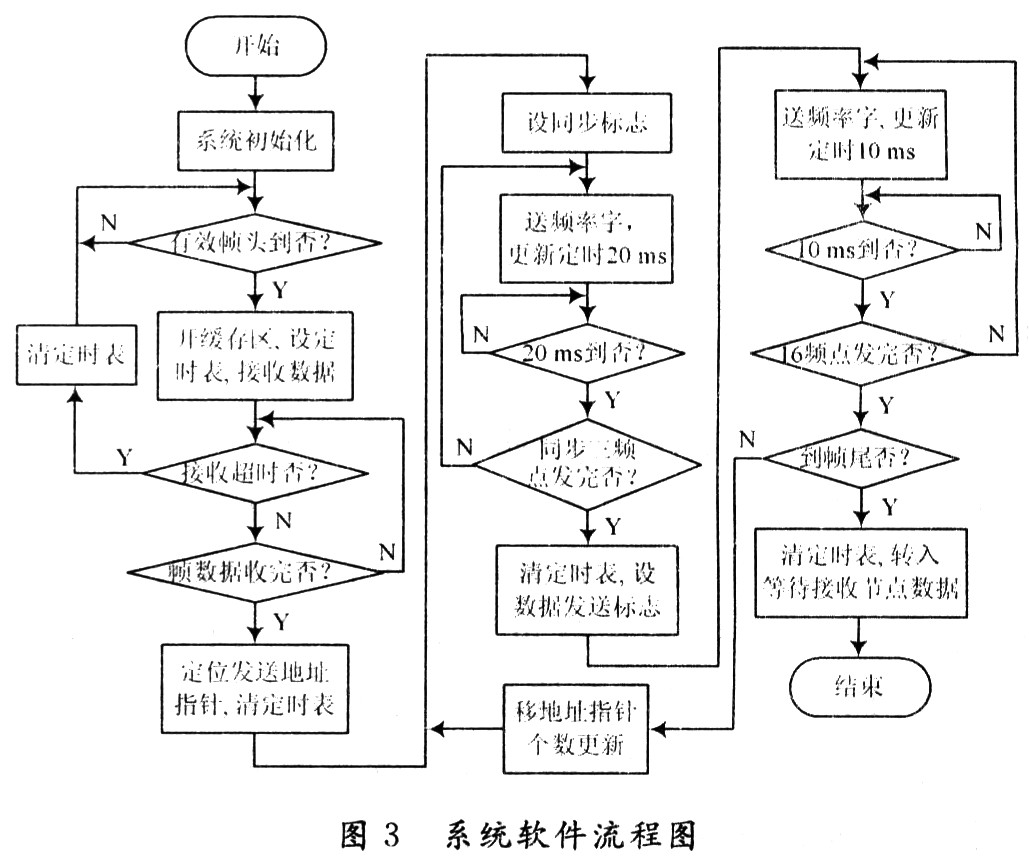 MCUs, operational amplifiers, and various IC circuits are used in the system, so 5 regulated power supplies are required. The span of voltage amplitude is from DC-12 to 12 V. The current output to each load is uneven, so the design of the power supply system plays an important role in the stable operation of the node. In order to realize the power supply of the system with a single power supply here, it is necessary to realize the voltage conversion. There are two main types of circuits that implement the voltage conversion function. One type is the switching regulator circuit. It uses self-excitation or other excitation methods to generate high-frequency switching currents, which are converted into DC again using nonlinear energy storage elements (such as inductance) Class conversion can be divided into boost type, buck type and isolated type. Earlier, DC / DC voltage conversion was implemented with discrete components. Currently, there are various dedicated ICs with better performance to complete the control and conversion functions of the circuit. The other is a linear voltage regulator circuit, which has now been developed to LDo (LowDrop Outregulator). LDO is a low-dropout linear regulator. Linear regulators use transistors or FETs to operate in their linear region, subtracting the excess voltage from the input voltage, and the pressure difference is shared by the transistor's tube voltage drop, resulting in a regulated rated output voltage. According to the above, to achieve a single power supply does not need to raise and lower the voltage, but also need to realize the conversion of positive and negative voltage. If the power conversion is all implemented by switching power supply, it will get a very high efficiency, but also increase the interference of high-frequency electromagnetic waves. At the same time, considering the current requirements of the system, a mixed structure of switching power supply and linear regulated power supply is adopted here. Among them, the conversion of small current load is realized by linear voltage regulator and LDO, and the conversion of positive and negative voltage and high current load is realized by switching power supply. The power system block diagram is shown in Figure 4. 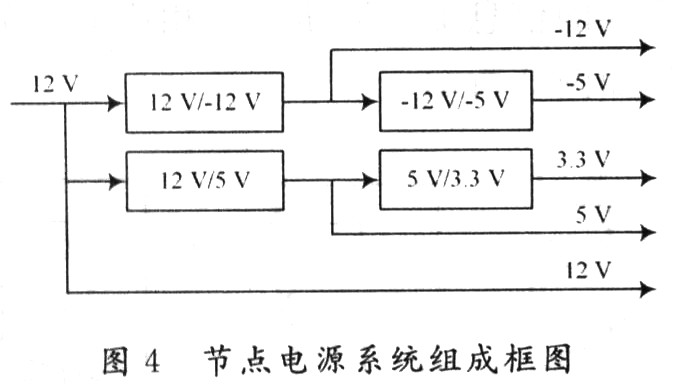 The communication between the PC and the master node is realized through the RS 232 serial port, the communication baud rate is 9 600 b / s. In order to be able to link with the computer interface and the TTL device of the terminal, it is necessary to transform the level and the logical relationship, using MAX 232 chip can realize bidirectional level conversion from TTL to EIA. The PC main control system realizes the control of the main node and the acquisition and display of sensory information. Therefore, the main control system interface should include the node's control panel and display window, as shown in Figure 5. 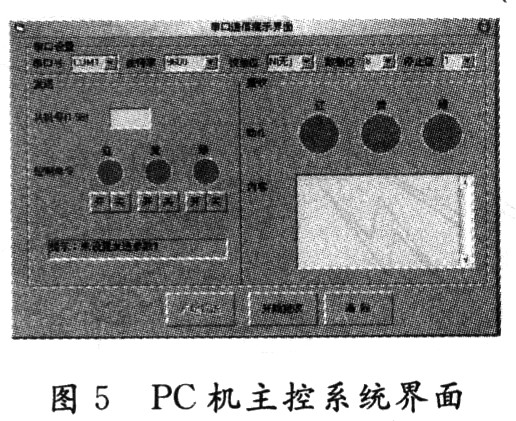 Here we introduce a high-performance 16-bit single-chip microcomputer as the control core and use frequency hopping communication to realize the underwater multipoint communication system. The system has reliable data transmission, friendly interface and strong scalability. Satisfactory results have been achieved in the pool test.