With the rapid development of the automotive industry, there are more and more electronic control units on the body. Traditional body harnesses not only increase manufacturing costs, but also reduce system reliability and maintainability. As a result, the car body bus came into being. The body bus design not only simplifies the wiring, saves manufacturing costs, improves reliability, but also saves system maintenance costs. The vehicle anti-theft alarm module is part of the body control unit (BCM). Because it has low real-time and speed requirements for bus communication, it is connected to the low-speed bus LIN.

The LIN bus is mainly used for low-speed systems that do not require CAN performance, speed and complexity. It is a low-cost serial communication network that uses a master node and several slave nodes, based on a common UART/SCI hardware interface. The maximum rate can reach 20kb/s.

The LIN bus transmits data through message frames. A complete message frame includes a frame header and an information response. The header includes an interval field, a sync field, and a marker field. The interval field consists of a sustained dominant level (0) of at least 13 bits, marking the beginning of a message frame during a data communication. The sync field contains clock synchronization information, and its format is 0x55. After all slave nodes correctly receive the sync byte field, the baud rate of the data to be sent by the host node is accurately calculated, and the baud rate is used as the next step or The baud rate setting value of the data is received, thereby synchronizing the clock between the slave node and the host node. The flag field defines the content and length of the message. The message response is sent by the host node or the slave node according to the information of the flag field, and is composed of 2, 4 or 8 bytes of data and a 1-byte checksum. The verification is obtained by calculating all the bytes of the data for the correctness of the data of the receiver.

The two main components of the system are LIN transceivers and microprocessors. Since the burglar alarm module is a Battery-powered LIN node, it is necessary to consider low-power devices when selecting devices. The LIN transceiver selects the TJA1020, which is the physical media connection between the body controller and the burglar alarm module, and is the interface between the LIN master/slave protocol controller and the LIN transmission medium. The transmit data stream of the protocol controller input pin TXD is converted to a bus signal by the LIN transceiver, and the level flip rate and waveform are limited to reduce electromagnetic radiation. The receiver of the TJA1020 detects the data stream on the LIN bus and passes it to the protocol controller via the RXD pin. The TJA1020 features a low-power management mode that consumes little current in sleep mode and reduces power consumption in error mode. Therefore, the TJA1020 is ideal for battery-powered LIN nodes such as theft detection module. The system uses STMicroelectronics' 8-bit microprocessor STM8S105K4 as the master microcontroller. When running on the internal 128kHz clock, the static power consumption can be as low as 0.6mA. Meet the system's low power requirements while having a LIN controller and battery charge detection 10-bit ADC function.

The communication information frame between the body control system and the burglar alarm module is defined as follows:

The wake-up command is used to wake the system from sleep to the unarmed state, and the sleep command is used to instruct the system to go to sleep. The contents of the command information frame include fortification, defense, alarm commands, and definitions of alarm status such as alarm period, number of times, and so on. The state transition of the system is shown in Figure 2. 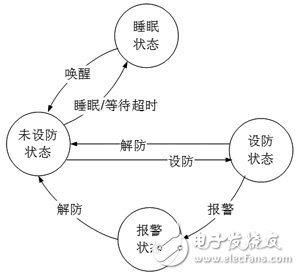